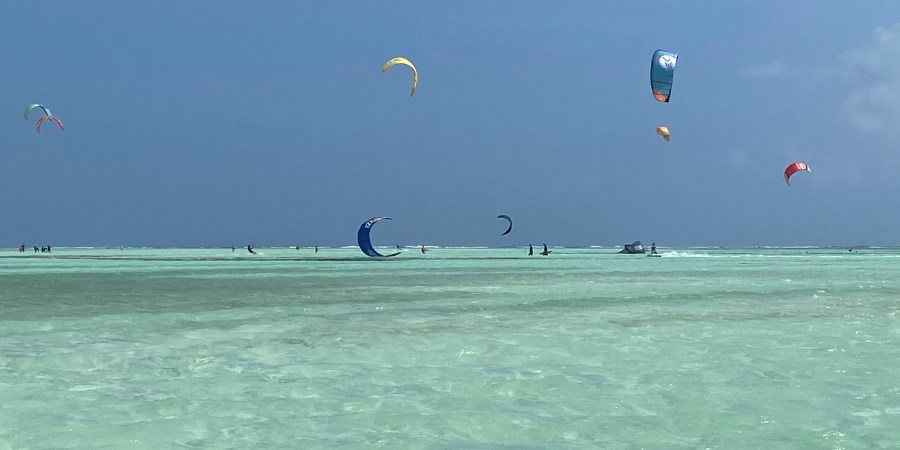 You may have seen pictures of the beautiful blue flat water promoting magical kitesurfing destinations on Facebook or Instagram. One of those that always appears to pop up is a promotion for the island of Zanzibar and undoubtedly influenced my decision to pitch a visit. The island is part of the African continent and the country of Tanzania, accessible only by boat or airplane. Zanzibar is rich in history with a blend of Arabic and African cultures and traditions. The country just gained its independence in 1964, but was a first settled by the Germans in 1880. The main language is Swahili…. yes, I know what you are thinking! Don’t freak out because most people speak English and are eager to communicate with you and show you their island. The country is predominantly Muslim with conservative traditions, but the beach towns on Zanzibar tend to be way more chill with a western attitude. The relaxed beach vibes coupled with new and local food experiences let every explorer’s heart beat faster. The food is simple yet rich in influence from India, Africa, and the Arabic world. Fresh tropical fruits dominate the daily dose of vitamins and continue to main meals in combinations with chicken and rice dishes. Oh, and let’s not forget the chips, aka french fries.

There are two main kite seasons in Zanzibar, one in winter (Dec-March) and one in summer (June-Sept). I visited over New Year’s Eve and had mediocre wind despite the windy season. Only two days out of 5 were kitable, which was unusual given the winds are consistently 20-23 mph. In all fairness, most people probably spend more days in Zanzibar, which then means that one could get a fair average of one day on and one day off kiting. The tides are drastic and can shift water levels by 10 feet which means the beach and water you found yesterday is now a half a mile walk away. It’s rather a curious occurrence. Though, the water is beautifully clear, warm, and a twintip paradise just like advertised.

As a word of caution, the farther out you get in the water, the higher the likelihood that you may find sea urchins. They are pokey, but the water is so clear they can easily be spotted, thus are hardly an issue.

Zanzibar is a known kite destination and therefore comes with a number of kite schools. Some are run by locals, Eastern Europeans, and Germans. The prices for lessons are a little better than most lessons in the US and one can get a 6h one-on-one coaching for $250 USD.

Flying directly into Zanzibar (ZNZ) is the easiest way to get to the island. Flights are available from a number of European cities, including Amsterdam, Paris, and Frankfurt. I flew on KLM from Amsterdam and spent a night in the city of Stone Town. You can also fly into Dar Es Salaam and take the ferry to Zanzibar by car.

On my first morning there I hailed a taxi for the drive to the Paje Beach area via the heavily negotiated price of $30 USD. Get cash before you go to the beach, many businesses accept cash only! There are two ATM’s in Paje, but during my stay they were often out of money by early morning.

Kiting in Paje is a twin tip heaven with shallow and flat water for miles. There is so much space in the kiteable area that its pretty much like ‘launch your kite and go!’ At the time of my visit, there were no designated areas for advanced or beginner kiting, but given the vast space it would be pointless anyways. There were a number of beginners close to shore, but once you are up they are quickly left behind as you head out into the distance. There is not much to describe; the water is knee to waist deep everywhere and flat throughout. Though, if you are looking for action beyond your normal twintip-diddledoo, kite adventurers may want to explore the reef where the waves get between 4-6 feet.

My trip was very spontaneously arranged so for the first night I stayed at Ndame Beach Lodge, which is located right on the beach and offers a variety of lodging options. I opted for a simple room with two twin beds and a bathroom with a shower. A breakfast was provided and was a nice sampling of local foods and fresh fruits (plus some American standbys such as eggs and toast).

For the second part of my stay, I found a great little Airbnb in Bwejuu, which was across the road from the beach. It included a home cooked breakfast and was a short public bus ride into the town of Paje. I wanted to experience a little more like what locals experienced so I used the bus, which was less than $1 each way. You could also kite from the beach across the road, but there was more seaweed and fewer kiters.

There are many places to eat right on the beach, but the prices are very touristy. I found that there was a place the set up at night on the main road that sold Zanzibar Pizza. Zanzibar Pizza is kind of like a pancake with toppings and is a fun “street treat” for less that $5.

The other place that I frequented didn’t have a sign or a name, but Google shows that it is “No Name BBQ”. So look on Google for BBQ and it will get you there. It’s a very basic locally owned place with traditional for food – chicken and beef, along with fried and the local slaw-type salad.

Zanzibar is quickly moving up as a touring destination so there is no shortage of people trying to sell you tours or to various other spots on the island. On one of my no-wind days I signed up for a “swim with the dolphin tour” on the south side of the island, but sadly it was not the day for wind or dolphins. Many people reported having fun on the tour on Google and Yelp, but it didn’t seem to be my day. Zanzibar and Tanzania are filled with African wild life and safari offers. Use caution when choosing a guide as there are reports that some of the tour operators chase the wildlife. Chasing wildlife with tour groups has a negative a impact on the natural wild life behavior.

During my journey, I loved just walking on the beach and wading through the tide pools. The beaches are endless and peaceful and one gets to kick the sand and zone out from daily “wear and tear” at home. Eventually you will encounter the Maasai tribe members that have come to the island. They will offer you their self made wares for sale or charge you to take a photo.

While in the midst of Africa I decided on a unforgettable 4 day safari in the Serengeti. For this I flew from Zanzibar to Arusha and caught a safari with a local tour operator. The tour included accommodations and I was able to see lions, cheetahs, elephants, rhinos and many other African wildlife. Four days was the perfect length for the trip; any longer would have been too much non wind activity for this wind deprived kiter.

If you are coffee addicted like me then you might be curious about the local coffee culture. Especially since much of the coffee we consume in the west comes from Africa and Tanzania. There are several coffee shops on the beach near the kiting scene and you can find most kiters reclining at Mr. Kahawa in between sessions. A truly chill place to relax from a windy day, Mr. Kahawa was always packed and had comfy seating to just enjoy the beach scenery. Although coffee is grown in Tanzania you will not find a Starbucks, drive through, whipped cream and chocolate sprinkles on your coffee. Just plain coffee the way it was intended! Smoothies, on the other hand, are found at most local shops. Zanzibar is a tropical island with abundant fresh fruit like mango and papaya!

So if you’re looking for the kitesurfing destination that is a tropical paradise, look no further – the culture, the people, and the beautiful beaches will give you an unforgettable stay in Africa. And when you finally make it, “Jambo” means hello!