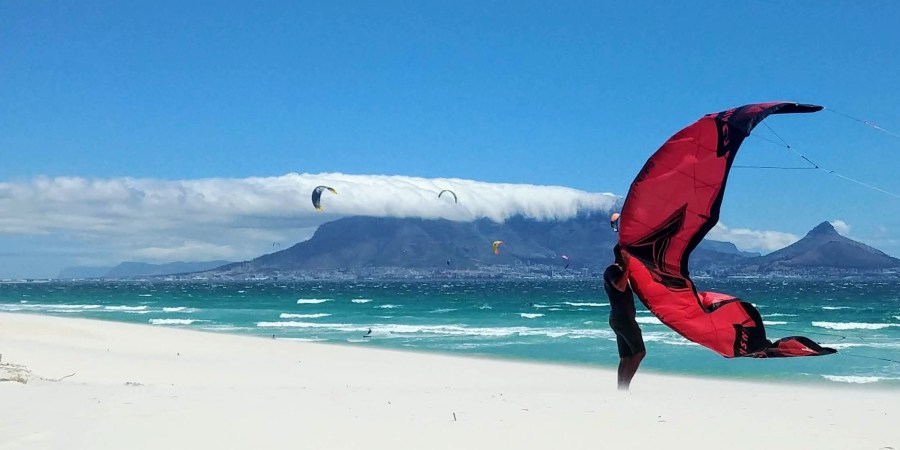 White beaches and wind here and there make kiteboarding and living a decent experience in coastal Mississippi. Though, nothing gets me more excited than the thought of new cultural experiences infused with blue water and endless wind. I currently call Gulfport, MS home, and want to share with you, given you are willing to sit through six-hundred words, why Cape Town, South Africa is such a special place.

Two continents away, South Africa is not exactly a stone throw from the US, but worth every penny I spent on kiteboarding magazines to read about experiences of others’. Who doesn’t remember seeing the lofty jumps followed by kite loops in the shadow of the famous Table Mountain? Yes, Cape Town is a place where the winds are firing and the waves are kicking during the South African summer from October to March. The consistent wind, the white sandy beaches, and the smooth, but energy loaded 10 ft kickers are the reasons the RedBull King of the Air found its home at Blouberg Beach, Cape Town since 2013.

In 2017, I was fortunate that my employer granted me a 4 month sabbatical in Cape Town. Needless to say, I selected the location less for my professional development, but more for the fairy-tale like kite adventures I read so much about. I had never been to Africa and even as an experienced traveler, I didn’t know what to expect and begun the planning process.

I planned my trip from the beginning of January to the end of April, the second half of the summer in the southern hemisphere. Stellenbosch, a beautiful small town filled with 300 year-old Cape Dutch architecture became my temporary home. Stellenbosch, or Stellies, as some locals call it is located within South Africa’s wine region with beautiful rolling hills, dry climate, and orange painted mountains at sunset. Stellies is a 40 minute drive to the kite hotspots in Cape Town, but staying here provided me with a more real life experience away from transient tourism. I did what I had to do for my American employer and for professional development purposes, but my secret mission was always experiencing the international kiteboarding scene around the Redbull King of the Air.

After a few days and becoming situated driving on the left hand side, I took my first journey to Blouberg Beach to scout the location. I strolled through some kite shops right by the beach and loaded up on foamy cappuccinos while watching the kite scene across the road. I asked someone to share some kite specific detail on kiting in Cape Town and it turned out he was a kite instructor and on his way to take a “gig” in Dubai. He left me with some cautionary words; “make sure you turn a bit downwind when going over the waves. The force of hitting a wave head on could dislocate someone hips.” With these light hearted words in hand, I made my way to the beach for my first session.

The beach crowd are predominantly international visitors (Dutch and Germans escaping the dreary winters) and extremely helpful assisting with launching and landing. Having assistance is crucial because the winds are nuking in Blouberg. Strong winds are most often indicated by a thin layer of clouds on top of Table Mountain called “table blanket.”…get ready when the blanked starts forming!

I maxed out my 7m wind range every afternoon, leaving me with short and overpowered 30 minute sessions. One day I happened to park my car at Dolphin Beach next to Kevin Langeree and shared my frustration. He suggested to go around 9 in the morning as the winds will be kicking up to 40 knots in the afternoon. I have since seen seasons with fewer windy days, but on occasions still find myself praying for less, not more, wind.

Following the advice my next few days began early and I was kiting until about noon. Beach access is abundant at Blouberg Beach, but my favorite spot is Dolphin Beach for the adjacent Dolphin Hotel with restaurant, beer, and coffee, plus the wider beach, and of course, Lambert the parking guard (an awesome guy worth his own story).

Blouberg offers many additional beach access points (from Sunset Beach down to Doodles) and all are very suitable for kiting. A short 10 minute drive along the coast is Big Bay, a scenic place filled with restaurants and cafés and, of course, beach access for kiting and surfing. The waves are a bit milder here and so is the wind. On average, a 7m in Dolphin Beach would mean a 9m in Big Bay.

Cape Town during the windy season also becomes home of many pro riders – mainly due to KOTA. You can see them practicing here and there and recognize them by their 60 ft mega loop show. It is almost a bit cliche, but when the wind hits between 30-40 knots, kite-brand stickered vans will pull into the parking areas with pro riders pushing their limits on 9 or 10m kites.

Aside from kiteboarding, the Western Cape has an abundance of outdoor activities and a café culture that does not easily find its equal. Whether it is hiking, biking, zip-lining, or sight-seeing, the Cape will not allow you to get bored. Even after six trips, I still feel I haven’t seen or done enough.

The Western Cape is also considered the “Napa Valley” of South Africa offering access to world class wines and restaurants at fairly low prices. For Dollar and Euro, prices are low for services and you can have an exclusive, multi-course, estate dining experience for $100. Wineries offer tastings and pairing around $7 to $10 on the lower end and are coupled with stunning views that never fail to impress. My favorites are Rust en Vrede, Rupert and Rothchild, Bartinney, just to name a few.

Needless to say, during that first trip, the four months flew by and I feel my story is only partly complete as I did not get to tell my trip along the garden route to the Eastern Cape, bungee jumping the world’s highest bridge jump, visiting deserted beaches, kiting in rivers, passing by ostrich farms, getting inspected by an elephant, or filing a police report. South Africa and its people quickly became my favorite place to be and I have since been back five more times.

Stay tuned for Part II; kiteboarding in Langabaan and Shark Bay, a flat water lagoon only one hour north of Cape Town.